Bexleypen.com is reader-supported. When you buy via the links on our site, we may earn an affiliate commission at no cost to you. 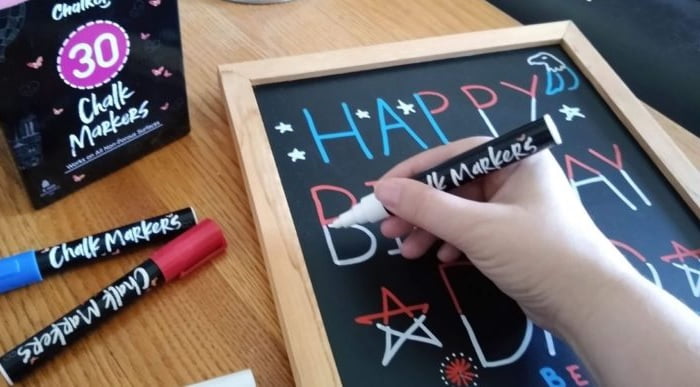 Using chalk pens is fun and rewarding because they help you achieve what you need to in lectures. You can capture the interest of your students and make them attentive to the lessons. Or if you’re a restaurant owner, using a chalk pen to attract customers with a chalkboard menu outside the restaurant is also a cool idea.

The problem is “how to get chalk pen off a chalkboard” after you’ve achieved your goals and need to clean the marks up. As sometimes, the marker doesn’t get off thoroughly off the board. So, what should you do?

Don’t worry now because we’re discussing the coolest ways on how to get chalk markers off a chalkboard completely. In this post, we’re covering the simple methods on how to remove the markers quickly.

What is a chalk marker/pen?

It is typically made with a pigment-based and paint-like formula that makes it ideal for use in the chalkboard. It can offer you an opaque coverage at the same time a vibrant color. Chalk pens or markers are like paint pens and can give a chalk-like feel – except the powdery mess of traditional chalk. Their ink doesn’t come off or smear if you won’t remove it with water.

What are the differences between chalk and chalk pens?

Traditional chalks are made from calcite or gypsum, so they have a chalky, dusty, and dry texture, while chalk markers offer a liquid and smooth texture because they’re made from pigment-based ink. The traditional chalk also leaves a trail and creates non-vibrant marks. On the other hand, a chalk marker can create a line, which is more solid and offers you a more brilliant look than a regular chalk.

In terms of erasure, chalk sticks aren’t hard to erase even if they leave a dusty and cloudy trail. On the other hand, chalk markers aren’t that easy to remove. It is why they’re commonly used for signages.

Most chalkboards are porous because they’re made from wood materials and have microscopic pores. They allow the ink to seep or pass inside their tiny pores/openings and they are hard to erase. There will be marks left even if you have erased everything if you used a chalk marker. This is called ghosting, which is characterized by the small particles seeping through the pores of the board.

What are the types of chalkboards?

To discuss what we’ve tackled a bit earlier is the type of chalkboards. This is one of the first to determine if you want to know the kind of chalk removal technique to use. Nevertheless, you can tell by now the differences between traditional chalks and chalk pens. Now, what you need to know is to tell the difference or identify a porous from a non-porous chalkboard.

The cheapest type of chalkboard is MDF that has been around for a long time and has been standardized in many classrooms. Also called a medium-density fiberboard, which is what you can also commonly see in household construction, MDF allows for easy writing on its surface one coat paint is applied to it; however, it remains porous.

The next one is a plastic chalkboard, which is typically made from PVC and acrylic, and is commonly used in many classrooms. Its surface is smooth; however, remaining chalk on the surface will still not be removed completely.

Another chalkboard is made from slate, which is non-porous. However, a problem with this is its rough and uneven texture. In addition is a porcelain sheet chalkboard, which is nonporous but expensive at that. But then, it is high in performance and quality.

How to remove chalk off the chalkboard?

There are several ways on how you can erase chalk from a chalkboard depending on what your board is made from. Keep reading in the following.

This product is a perfect alternative when removing chalk pen off a chalkboard, but then you must use it over again to get rid of the remaining marks.

2. Using the removers made for a chalk marker

There are liquid removers that you can use in removing chalk marks, and they are handy as they’re in a spray bottle that come with a wiper and a sponge. However, they are expensive.

It is a common household cleaner, so you might be able to find it around your home. It can also be used in removing chalk pen off a chalkboard. However, be careful with it because prolonged exposure can be bad for the lungs.

A magic eraser, which is a white sponge, is used in removing wall markings. It is affordable than other items to remove chalk off chalkboards and is designed in removing stains, including those from chalk pens. You can reuse a magic eraser several times.

There can be residues remaining by a magic eraser. To remove the markings completely, you might want to use this household product. It will get rid of the remaining residues and make the chalkboard appear as if it’s new and nothing was ever written on it. This can clean faster, while also disinfecting your chalkboard.

How to erase markings off the chalkboard

Removing it from a porous surface can be tricky. Here are a couple of steps to follow.

Combine the vinegar with the chalkboard cleaning liquid or water, but then remember to start with only equal parts of the water mixture. Then, check the manufacturer instructions for the chalkboard cleaning liquid. Stir them thoroughly, and then you can soak a scrubber/magic eraser/towel to wipe your solution. When done, try squeezing so that you can remove the liquid remaining. Next, you can start wiping the affected area or the whole chalkboard.

When done, you can just let the liquid settle for up to seven minutes before scrubbing whatever ink is left. Once finished, you can dry the surface using a towel wipe. Repeat the process of soaking and scrubbing.